Be our neighbor! Our favorite places across the city for young professionals to call home.

Enjoy a drink at a local hot spot

The Public Theater of San Antonio

Founded in 1912 as the San Antonio Little Theatre as part of the growing Little Theater movement sweeping the nation, The Public Theater of San Antonio operates in the first city-owned and city-built theater in the United States. The Public produces a series of professional live theater productions annually. Each year, more than 30,000 patrons attend performances or participate in our community engagement programs. The Public’s staff, with the help of 250 volunteers, produces a series of plays in its two theaters.

The Russell Hill Rogers Theater, seating 350 patrons, is home to larger plays and musicals while The Cellar Theater, seating 60 patrons, houses a variety of dramas, comedies, and experimental works. Both stages host original works by local playwrights as well as classic and recent Broadway hits. The Public contracts hundreds of local artists, showcasing some of San Antonio’s greatest talent. In July 2017, The Public entered into a contractual agreement with Actors Equity Association to become San Antonio’s first and only regional AEA Small Professional Theater.

502 is the newest music venue in San Antonio. It has a great lighting system, a great stage, an amazing selection of drinks, and friendly staff. As a small music venue, 502 enables the audience to feel that performances seem closer to the bands or artists performing in your living room than a bigger venue. It is about to become the popular place for the young generations in San Antonio.

Brown Coffee Company is located in 1800 Broadway street in San Antonio. This coffee shops is famous for its casual setting, and the featured coffee, El Pilon, a natural process coffee cared by Mssrs Urena and Mendez in Costa Rica.

CrossFit Lobo is a CrossFit gym in San Antonio that aims to improve members' personal health and fitness goals. Their professional coaches and CrossFit Workouts of the Day are the highlights that you should not miss.

The Gruene Hall is located in New Braunfels ( about 40 miles away from San Antonio), but it is worth visiting because The Gruene Hall, built in 1878, is Texas' oldest dance hall. Its design has not physically changed much since the Hall was built, featuring a 6,000 square foot dance hall and a high pitched tin roof. People come to here to enjoy live music, cool drinks and a relaxed atmosphere.

Ocho is located in a beautiful glass conservatory alongside the River Walk. It offers breakfast, lunch, dinner and late-night snacks indoors and on our breezeway. Ocho is widely appreciated thanks to its excellent meal and cocktail. 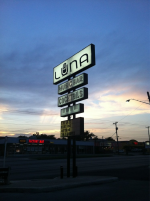 Luna the only classic sit-down live music nightclub in San Antonio. It is famous for its Soul, Blues, R&B, Jazz, and Reggae music during the weekend live entertainment. Luna is the place to enjoy good music and drinks in an intimate setting. With a wide variety of ages and cultural backgrounds of the crowd, Luna attracts people as a popular weekend spot.

You can enjoy a delicious collection of coffee and bakeries at Rosella Coffee, which is located in 203 E Jones Ave.With high-quality services and products, it is a perfect place for you to meet family, friends and business partners for coffee, lunch, and

Description: We provide entrepreneurs access to professional and confidential business advising, a variety of quality training programs, and an extensive referral network at the Small Business Development Center (SBDC). Benefits of contacting your local SBDC include: